Is Arc-Fault Circuit Protection Necessary in My Home? Arc-Fault Circuit Interrupters (AFCIs) are one of the most advanced forms of electrical fire protection available today. The 2017 National Electric Code (NEC) requires either a circuit breaker or listed combination-type AFCI receptacle, at the origin of select electrical branch circuits. Remember, the purpose of an arc-fault device is to detect both series and parallel arcing anywhere in the electrical circuit, to include defects in the wiring itself. 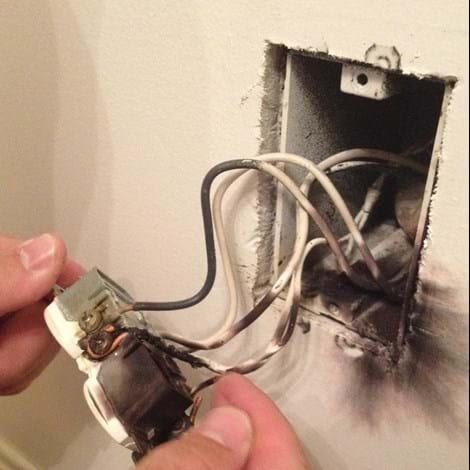 Electrical arcs are caused by loose connections, damaged wiring, worn insulation, or other construction damage at the time of installation. During an arcing event, extreme heat up to 35,000 degrees Fahrenheit can be reached, igniting any combustible material close to the fault. Oftentimes, the arc will ignite cavity insulation, wood framing, or other paper-based construction products. This is why AFCIs are installed as either a circuit breaker or at the first receptacle in the circuit. Both locations provide maximum protection to as much of the electrical wiring and fixtures as possible.

Where In My Home Do I Need Arc-Fault Circuit Interrupters?

The answer to that question, like most, is it depends. Like all other building codes, the NEC establishes the bare bones minimum work that is legally acceptable, providing a floor for the lowest standard of safety given the industry knowledge at the time. Looking through the lens of codes alone, locations in the home that require AFCI protection depend on which version of National Electric Code your jurisdiction has adopted. As construction and electrical safety knowledge evolve, so to does the codes. The NEC is updated every three years, incorporating new technologies, methods, and requirements.

Since their inception in 1999, arc-fault circuit interrupters, like GFCIs, have expanded through various code cycles. Upon introduction, arc-fault protection devices were only required in bedrooms. This was based on extensive research in the 1990s by Underwriters Laboratory (UL), and the U.S. Consumer Product Safety Commission. During the early 1990s, these organizations estimated there were 41,000 electrical home fires resulting in nearly 2,000 deaths and serious injury per year. Later research by the U.S. Fire Administration found a large proportion of home fires initiate in bedrooms peaking between midnight and 8 a.m. Fires igniting in close proximity to sleeping occupants provide little warning, nor adequate time to evacuate resulting in the large numbers of injuries and fatalities. After real world testing and follow-on research demonstrated the efficacy of AFCIs, additional rooms were added to the list. The largest expansion of arc-fault protection occurred in the 2008 NEC code cycle. Specifically, arc-fault circuit interrupters were required on all 120-volt, 15 and 20 ampere electrical branch circuits supplying power to living rooms, dining rooms, family rooms, parlors, libraries, dens, sunrooms, closets, and hallways. Finally, in 2014, kitchens and laundry rooms were added to the arc-fault protection list. This 2014 requirement both enhanced and complicated electrical safety, in that now, kitchens and laundry rooms required both GFCI and AFCI protection, which led to the development of Dual-Fault Circuit Interrupters (DFCIs). These devices detect both ground-faults, and electrical arcs providing maximum protection for both people and property.

Currently most, but not all, Authority Having Jurisdictions (AHJs)in Missouri and Kansas operate under the 2017 edition. Some smaller cities and counties may still operate under an older version and therefore will not require the same level of protection. That being said, most people generally aim for better than the minimum when it comes to protecting their loved ones and their homes. Remember, codes are not necessarily good design nor best practice, but just the minimum level of safety at a given time. That being said, the National Electric Code does not prohibit or otherwise limit the installation of arc-fault circuit interrupters. Therefore, safety conscious homeowners may voluntarily upgrade their home’s electrical system to the most current electrical code, or better, even if the AHJ has not yet adopted the most current code version. The U.S. Consumer Products Safety Commission (CPSC) estimates that more than half of all electrical home fires can be prevented with the installation of Arc-Fault Circuit Interrupters (AFCIs).

Although generally code revisions do not require immediate compliance in existing buildings, the NEC does provide guidelines on when arc-fault protection must be added for existing homes. In accordance with NEC 210.12(B), where an electric branch circuit requires ACFI protection but does not have protection currently, once a modification, replacement, or extension of more than six feet is made to the electrical circuit, AFCI protection must then be added. The intent is to bring existing electrical infrastructure up to current adopted codes when repairs, or upgrades are being made, minimizing the economic cost to property owners while providing a mechanism for improved safety.

Finally, when installing arc-fault circuit interrupters, either circuit breaker or combination type receptacles, NEC sections 210.12 and 406.4(D) require the device to be readily accessible. The National Electric Code defines readily accessible as being reached quickly without the use of tools, ladders or requiring the movement of obstacles. The intent of this requirement is to allow occupants or a qualified electrician the ability to easily test, reset, or replace the device without needlessly exposing themselves to live electrical components and shock hazards.

Not sure your home has adequate protection from electrical arc faults? Want to proactively upgrade your home’s electrical safety? Consider hiring a full-service electrical professional with expert knowledge to properly test, diagnose, and install arc-fault circuit interrupters. A small upfront investment in advanced protection can save lives and tens of thousands of dollars in fire damage.