According to Electrical Safety Foundation International (ESFI), there are more than 51,000 home electrical fires each year, causing nearly 500 deaths and more than $1.3 billion in property damage. The electrical distribution system, including electrical main panels are the third leading cause of home structure fires. A home’ s main circuit breaker panel is one of the most critical components in an electrical system. The panel receives constant electricity from the utility provider and distributes power throughout the home or building. In addition to providing power for heating and cooling, hot water, cooking, entertainment, and even car charging, the electrical service panel is designed to protect the home and occupants from fault conditions such as overloads, short-circuits and ground-faults. Over the previous decades, a number of electrical equipment manufacturers have sold defective electrical main panels still in use today. Homes built prior to 1990 may have one of the following types of flawed and dangerous load centers. Whether recalled by the manufacturer, or simply outdated, these panels have no place in your home. Federal Pacific Electric Company (FPE) was one of the largest and most popular manufacturers of electric circuit breaker panels in the United States. Between the 1950s and 1980s, millions of FPE electrical panels were installed in homes throughout the country with many of these panels still in use today. Over time licensed electricians and inspectors discovered these panels posed a serious home fire hazard. In the event of an overcurrent or short circuit the Federal Pacific circuit breakers failed to trip and cut electricity supply. One report found some FPE panels failed to operate properly nearly 60% of the time in the event of a power surge. Normally in the event of a fault condition a circuit breaker will trip based on the fault current. How quickly the breaker trips is proportional to the size of the current flow. For a high ampere short circuit, the circuit breaker should trip almost instantaneously, cutting power to the failed electrical circuit or appliance. Federal Pacific circuit breakers failing to trip causes extraordinary amounts of heat to build up inside the panel resulting many times in a home fire. Some reports have found FPE circuit breakers turned to the off position still allowed electricity to flow.

Each issue is a safety problem by itself, taken together, FPE panels would not be allowed for sale or installation today. In 2005, a New Jersey State Court ruled Federal Pacific, “violated the Consumer Fraud Act because FPE knowingly and purposefully distributed circuit breakers which were not tested to met UL standards”. 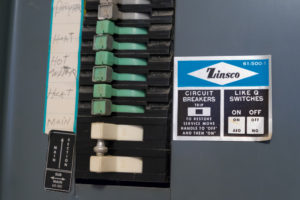 Another manufacturer, Zinsco was a prominent electrical main panel maker during the 1970s. During the early 1970s a significant design flaw was discovered with the circuit breaker connection to the panel bus bar making these panels extremely unsafe. The loose connection causes overheating in the panel resulting in circuit breakers melting and welding to the service panel bus bar. The extreme heat damaged circuit breakers preventing them from tripping in the event of an overload or short circuit condition which led to subsequent fires. In 1973 Zinsco was purchased by GTE-Sylvania who later changed the Zinsco product name to challenger in 1978. Eventually, in 1981, GTE-Sylvania divested itself from the electrical distribution and panel business and Zinsco effectively went out of business. Zinsco never issued a product recall for their panels. In 2002 a class action lawsuit found Zinsco-GTE-Sylvania acted fraudulently by not testing their circuit breakers to UL standards. According to experts, roughly one in three Zinsco panels fail to trip during a tested fault condition.

An additional manufacturer, Bulldog Pushmatic Electric Company produced the Pushmatic Electri-Center installed in U.S. homes between 1950 to 1980. This panel is considered obsolete due in part to the unique push button type circuit breaker design which ultimately proved unreliable. The fact the company is no longer in business is due in part to the inconsistent thermal only, grease fed, trip mechanisms and components used in their circuit breakers. This circuit breaker lacks the magnetic solenoid used on newer breakers to provide reliable trip function for short-circuits and ground-faults. Over time, assessments have found the internal springs rust, corrode, and become brittle resulting in the circuit breaker potentially not tripping during a fault, or making reset difficult. Finding UL listed replacement parts are nearly impossible and extremely expensive to procure. Ultimately Pushmatic was later sold to various electrical manufacturers finally landing with Siemens. Finally, fuse panels are simply unsafe today given the changes in home electrical demand. Fuses are one of the oldest types of electrical panels, and incredibly dangerous because of the high failure rate. They work just like circuit breakers, except the fuse can not be reset and instead must be replaced. During the first half of the century fuse panels were the primary means of electrical delivery and overcurrent protection in homes, but electrical demand was small too. Many fuse panels were only rated for 30, 40 or 60 amperes. Today, homes have many more appliances, electronics, and general electrical loads. To support new home electric demands, modern electrical main panels outfitted with circuit breakers come rated as high as 225 amperes. Older fuse panels become unsafe when they are modified to serve todays electrical demands which overload the fuse panel thereby posing a fire hazard. This can happen by placing to many loads on a single fuse, removing a fuse and replacing it with a metal bar, effectively eliminating the overload function altogether, or replacing a smaller fuse with a larger one to prevent nuisance tripping. Replacing a 15 amp fuse with a 20 or 30 amp fuse is common in Edison or type “T” fuse bases which allow interchanging fuses of different sizes. Any of these modifications may place a current load on the homes wiring far exceeding its insulation rating causing a home fire.

Generally, homeowners are liable for personal injuries that occur on their property, particularly when harm is known or may be prevented. Most home inspectors are aware of unsafe electrical main panels and note the presence of such panels. If the inspector is not sure, they may recommend hiring a licensed electrical professional for a deeper inspection. Insurance companies assess risk when deciding to insure a home or calculate the premium. The track record and known hazards associated with these faulty and dangerous panels are well known. Having one of these electrical service panels in a home may make it challenging to find a carrier to insure your home. Some insurance providers will simply not insure the home until the electrical service panel has been replaced, others may omit fire coverage caused by the electrical panel, or damage caused by an electrical fire leaving the homeowner with the entire cost for fire remediation and rebuild. Even if an insurer covers the property the insurance premium may be prohibitively high.

The main circuit breaker panel is one of the most critical components in a home’s electrical system. A safe electric panel and quality code compliant installation are paramount to protecting people and their most valuable asset. According to a U.S. Census Bureau Survey on American housing, more than half of United States homes were built before 1980. Meaning an extensive number of homes may have used one of these flawed electric panels. If you suspect you have one of these dangerous electrical service panels or are not sure, consider hiring a licensed electrical professional with expert knowledge to inspect your homes electrical system. An investment in a safe electrical main panel can save tens of thousands in fire restoration, and most importantly save lives.

At Home Performance Group, we continue to invest in electrical technical training so we can safely install and upgrade main electrical service and panels. We have performed numerous service upgrades, main panel replacements, and sub-panel installations for our clients.