Why Are Two Prong Outlets Dangerous?

Two prong outlets are inherently unsafe and can be extremely dangerous. They are a well-known cause of residential home fires worldwide. According to the U.S. Fire Administration, 12 percent of residential homes fires in the United States involve outlet receptacles.

Two-prong receptacles by their design are ungrounded, and therefore do not have a connection to an equipment grounding conductor (EGC). An equipment grounding conductor can be identified as the bare copper wire or green sheathed conductor bundled together with the black ungrounded “hot” conductor, and the white grounded “neutral” conductor. The purpose of the EGC is to serve as a safety system, specifically to protect people from electric shock or lethal electrocution. The equipment grounding conductor provides three-prong receptacles a low resistance fault path back to the main electrical circuit breaker panel. In the event a connected appliance, electrical fixture or three-prong receptacle itself were to develop a ground-fault condition, current is directed along the EGC back to the circuit breaker forcing the breaker to trip. By tripping the circuit breaker, power is switched off in the circuit, rendering the faulted device safe to touch.

Because two-prong receptacles do not offer any such ground-fault protection, occupants may be exposed to shock or electrocution hazards. Additionally, without the presence of an equipment grounding conductor, high ampere fault conditions are carried back to the main electrical panel via the neutral conductor. Repeated fault cycles will degrade the wire insulation which can eventually lead to arcing or a structure fire. This is why two-prong receptacles are dangerous.

Old two-wire knob and tube circuits were installed in the United States from the 1880s through the 1950s. Beginning in the 1930s new wiring methods were developed, which eventually supplanted new knob and tube installations inside homes. 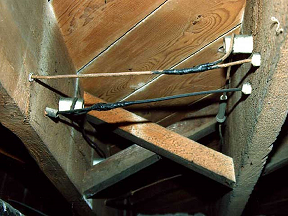 The primary replacement has been non-metallic (NM) two wire cable with a dedicated equipment ground. The first introduction of three-prong receptacles occurred in 1947 but was limited only to laundry rooms. In 1956, the NEC began requiring the addition of an equipment grounding conductor with new electrical wiring and further expanded the use of grounded receptacles to basements, garages, and outdoors. Finally, in 1962, the NEC was revised to require all new electrical branch circuits include an equipment grounding conductor and use of three-prong receptacles. Homes built prior to 1962 may have neither.

What Options Do I Have to Replace Existing Two Prong Outlets?

The National Electric Code (NEC) section 406.4(D)(2) provides three replacement options for existing two-prong receptacles that do not have a connection to an EGC.

The first option allows existing two-prong receptacles to be replaced with new two-prong receptacles. For most homeowners this is the least attractive option for a few reasons. First, this option does not change the receptacle’s configuration to the ubiquitous three prong configuration required by nearly all modern appliances and electrical devices. Second, this option provides no dedicated EGC or ground-fault path, for safety. Third, without remedy of the first two, the homeowner or occupants are left with a potential shock hazard or worse yet lethal electrocution risk. 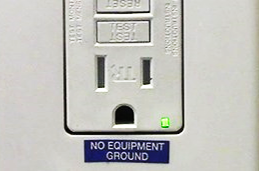 The second option is to replace each ungrounded receptacle with a ground-fault circuit interrupter (GFCI) receptacle. Although this type of installation is safer, this option still does not provide a dedicated ground-fault path back to the main electrical panel. In this application, the GFCI receptacle or faceplate must be marked, “No Equipment Ground” to alert a potential user that any connected equipment will not be grounded during use. The ground-fault circuit interrupter monitors amperage flowing out on the ungrounded “hot” conductor and compares to the return amps on the grounded “neutral conductor. Any measured difference in excess of 5 mA will trip the GFCI receptacle rendering the outlet and connected appliance safe to touch. Most often, current bleed occurs when there is an electrical connection between normally current carrying conductors of the branch circuit and chassis of the receptacle, or connected appliance. If the GFCI circuit fails, or an illegal bootleg ground has been wired within the electrical branch circuit, a potential shock hazard still exists.

The third option is to install a GFCI receptacle in the first position in the branch circuit, or alternatively a GFCI circuit breaker, with all remaining downstream outlets replaced with standard three-prong receptacles. Again, bear in mind, this option does not provide an equipment ground and still poses a potential shock hazard. In this application, the faceplate of the GFCI receptacle must be marked, “No Equipment Ground”, and the face plate of each subsequent three-prong receptacle must be marked, “GFCI Protected, No Equipment Ground”. The intent of the markings again, are to alert any potential occupant or user that the outlet, although three-prong, does not provide the safety feature afforded by the EGC.

When to Upgrade Wiring and Ungrounded Receptacles

The overall best option is to remove or abandon any old two conductor wires, and install new wire with an integral equipment grounding conductor. This method allows three-prong receptacles to be installed with the full protection afforded by the EGC safety mechanism. Obviously, this option is the most invasive requiring cutting into existing walls, ceilings and floors. Additionally, rewiring a home is expensive and may range from a low of $8,000 to as much as $40,000 depending on the size of the home, complexity of electrical system, and luxury features. Alternatively, section 250.130(C) of the NEC allows a separate EGC to be installed and bonded at a variety of points to achieve a solid ground connection. This option is available on existing installations without an EGC. Those ground connection points include the grounding electrode, grounding electrode conductor (GEC), equipment grounding terminal at the panel where the electrical branch circuit originates, and an adjacent EGC of another branch circuit that originates in the same panel. Installing a separate EGC may sound like a cost-effective alternative to installing a new circuit, however, the need to open walls, ceilings or floors and the time required to fish a single conductor does not provide any real savings. When choosing between an alternative EGC only option or a rewire, the cost is nearly identical. Given that, the best option is always to replace the entire cable with all new wire and receptacles.

Concerned about old ungrounded outlets? Purchasing an appliance that requires three-prongs and a dedicated equipment ground? Received an electrical shock at a two-prong receptacle? Consider hiring an electrical professional with real-world experience and specialized code knowledge to safely replace ungrounded receptacles.  An upfront investment in careful contractor selection can save both the headache of inconvenience and potential electric hazards.

At Home Performance Group, we continue to invest in electrical training so we can correctly assess, diagnose, specify, install safe electrical systems, upgrades, and repairs. We have performed numerous projects for our clients.